Urban Fallow was a commissioned scoping study from the Solent Centre for Architecture and Design for a programme of temporary arts/cultural interventions which explore future possibilities for development and public use of vacant sites in Andover, Basingstoke, Eastleigh and Winchester.

The programme demonstrated how a range of quality artistic interventions could maintain a lively and energised location and profile potential for future development. Local communities would have been facilitated to have a stake in thinking around their town and city spaces in a unique way, building a sense of ownership to maximise the potential of these spaces for long term, successful futures. 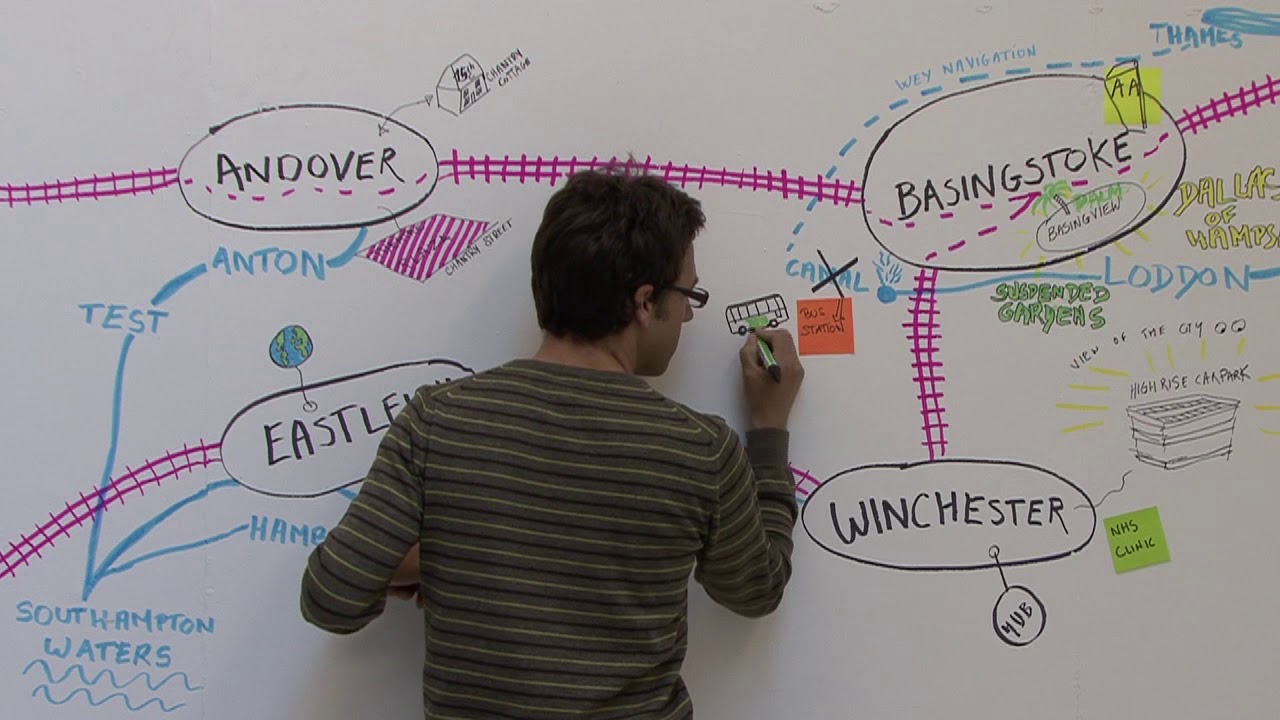 There would have been greater strength in communicating the project as a whole rather than as separate and discrete elements. This had a number of advantages; the audience would have started to recognise the branding as a large-scale intervention across the region encouraging participation. It would have also made the project more attractive to artists who prefer to have their work seen as part of a larger program rather than in isolation.

To provide a coherent theme, which at the same time highlights each of the four urban centre’s unique qualities is the greatest challenge for this project. The idea proposed exploits commonali- ties between the towns whilst also conveying their differences. The concept is designed to increase communication between the towns at a cultural, managerial and political level.

Crop rotation is the practice of growing a series of dissimilar types of crops in the same area in sequential seasons for various benefits such as to avoid the build up of pathogens and pests that often occurs when one species is continuously cropped. Crop rotation also seeks to balance the fertility demands of various crops to avoid excessive depletion of soil nutrients. A traditional component of crop rotation is the replenishment of nitrogen through the use of green manure in sequence with cereals and other crops. It is one component of polyculture. Crop rotation can also improve soil structure and fertility by alternating deep-rooted and shallow-rooted plants.

The Urban Fallow programme was initiated by SCAD with the aim to activate dormant sites. Drawing from the idea of leaving fields fallow for a season for them to recuperate, provides conceptual basis for this program. A vacant space can be seen to blight an area, but it also offers opportunities for change that fully developed sites cannot. New ideas can germinate and respond opportunistically to the context, leading to a greater richness of possibilities in an area.

By moving crops from one field to another, each location benefits from the specific qualities of the crop. This is translated for the Urban Fallow programme as the rotation or slippage of one town’s specific quality to its neighbour. To improve the structure of the fallow sites, mobile and shallow- rooted interventions will be alternated with more fixed and deep-rooted commissions.

The commissioned artists would have been asked respond to the overall curatorial framework and the specific concept, which has been lent or shifted from another town. This would have enabled some cross- fertilisation, and reinforced the sense of a shared programme and interest for the parties involved.

After researching the qualities of the sites, Urban Fallow developed a theme for each centre: circulation, germination, propagation and photosynthesis.

The circular and rotational nature of the concept can ease any sense of hierarchy between the four local authorities involved in Urban Fallow. Each artistic response would have been specific to the site and the project’s framework as a whole. Urban Fallow inscribes itself in the concept of site-specificity posited by art writer Miwon Kwon. She writes that site-specific art is no longer bound to a physical location but can be specific, for example, specific to the context in which it was formed, an institutional or curatorial framework, or a discourse. Whilst each concept/crop is rotated from one town to the other, the concept chosen for cultivation has also been selected for its relevance to its new site.