See what we have been cooking in our labs, tutorials, techniques & more
Feb
16

The City Speaks, a major new commission for HULL 2017, functions as a 21st century Speakers’ Corner in which open-air public speaking takes on epic proportions as spoken words are translated to text and relayed on one of the towers supporting Hull’s tidal barrier.

A steel lectern located on the quayside of Humber Dock offers a platform for members of the public to broadcast their thoughts and feelings. A hidden microphone captures their words and sends them to a data processing cloud which transcribes the phases into a scrolling dot-matrix text ascending the tidal barrier. The plinth and the tidal barrier perfectly align at each end of Humber Street, allowing the speaker to see their own speech being emitted across Hull, not though the digital screens of telephones, tablets and computers, but as an embodiment of the Hull’s architecture itself.

The Hull surge tidal barrier plays a significant role in protecting Hull from flooding, as climate change increases the number of extremely high tides. Since its construction in 1980 it has saved over a 100,000 homes. In many ways this barrier has become the gateway guarding the future of Hull, replacing Beverley Gate where, in 1642, Sir John Hotham refused Charles I entry to the city, an act of defiance widely acknowledged as the spark that ignited the English Civil War.

These principles of resistance and protection lie at the core of The City Speaks. This installation gives voice to the diverse range of ideas and opinions expressed by the people of Hull and in doing so celebrates the intellectual and political resilience of the Hullensians.

The City Speaks plinth is located on the intersection of Humber Dock Street and Humber Street, Hull.

Lurking deep below the surface of Ourcq Canal jettisoned objects await recovery. Over the years their surfaces have gained the complexion of aquatic wreckage. For L’eau Qui Dort, the artist Michael Pinsky has used divers and cranes to dredge the canals and extract this debris.

Forty of these ghostly objects have mysteriously appeared upright on the surface of the canal water, bathed in aquamarine light. Again visible, these bicycles, shopping trolleys, signs and fridges confront their owners, demonstrating that society’s desire for the new can only be supported by rendering the old invisible.

A strange and beautiful soundtrack has been generated from these objects played by those who live around the canal. Each night this eerie composition emanates from spaces around the canal to form an intricate three-dimensional soundscape.

L’eau Qui Dort has been commissioned by COAL for La Villette during COP21 in Paris. The installation can be visited from November 25th 2015 until January 3rd 2016 and is free to the public.

Michael Pinsky is representing the House of St Barnabas with a new edition of Viral Planting where a microscopic image of the ebola virus will emerge from thirty-thousand plastic flowers. This viral depiction, appropriated from the media, has been magnified to the point where its surface breaks down to provide the structure for a bed of plastic flowers where each pixel is replaced by a flower bud. Viral Planting operates in the changing landscape of humankind’s obsession with viral disasters and plagues. The flowers are arranged to reflect each new virus which is prevalent in the media, contributing to a growing floral archive of viruses.

Michael Pinsky in conversation with the curator Katie Heller from 12pm on Friday 22nd of May.
http://www.artfairslondon.com/programme/talks

Of Soil and Water opens in King’s Cross 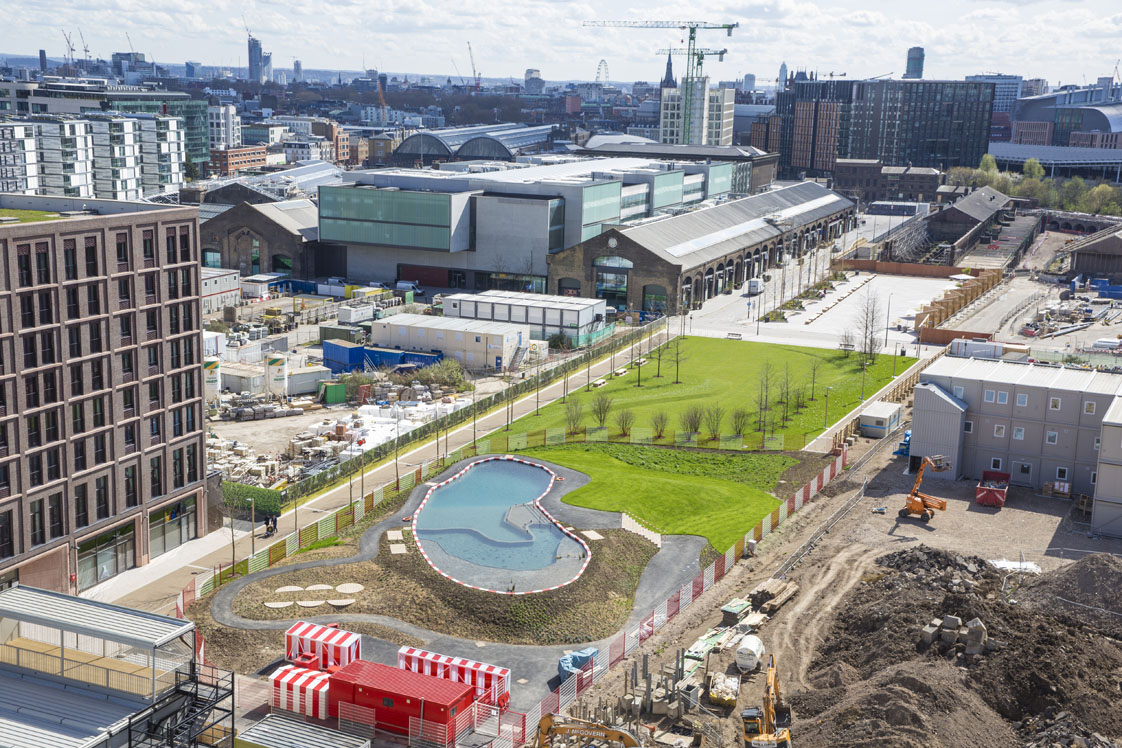 Curated by Michael Pinsky and Stephanie Delcroix and set in the King’s Cross development, Of Soil and Water: The King’s Cross Pond Club celebrates the power of nature to regenerate itself and to modify human behaviour in the heart of the city. Berlin-based artist Marjetica Potrc and Rotterdam-based architectural duo Ooze have moulded a mound and basin from the earth and water available at the construction site.

Whilst the mound and its surroundings have been planted with wild flora and meadow species, the basin is populated by halophytes, which have the capacity of filtrating impurities and turning its waters into a swimmable area. On any given day, the plants’ maximum cleansing power limits the number of human beings ‘taking the waters’ to 163.

Bathers climb up the mound in order to access the pond. Upon entering and leaving the water, they are exposed to the scrutiny of residents and passers-by. Once immersed in the protective waters, their gaze levels with that of onlookers unsettling the relationship between the observed and the observer.

Of Soil and Water posits the fragility of building sites as places in transformation in contrast to the self-regenerative power of nature thus addressing the value of land versus that of nature in the contemporary global city and the equilibrium human beings need to find between the two.

The installation will open to the public in May 2015. Please visit http://www.kingscross.co.uk/kings-cross-pond-club for an update on the opening date and hours.

Ljubljana and Berlin-based artist and architect Marjetica Potrč is joined in conversation by Stephanie Delcroix and Michael Pinsky, discussing her practice ahead of the opening of a new public artwork made in collaboration with Ooze Architects (Eva Pfannes and Sylvain Hartenberg). Commissioned by Stephanie Delcroix and Michael Pinsky for King’s Cross, Of Soil and Water: The King’s Cross Pond Club is a natural swimming pond on the Kings Cross site. Its central pool is surrounded by both hard and soft landscaping, including pioneer plants, wild flowers grasses, and bushes so that the environment evolves as the seasons change.

A Stitch In Time at the V&A

A Stitch in Time showing as part of Collecting Collections at the Victoria & Albert Museum in London. Many of the designs within the work have come from the V&A collection. More info here

A new monograph is to be published to accompany the exhibition Survey at the Museum of Contemporary Art, Chengdu, curated by Mei Huang. Supported by the British Council the catalogue contains texts by Mei Huang and an interview with Helena Reckitt.

Published by the Museum of Contemporary Art, Chengdu 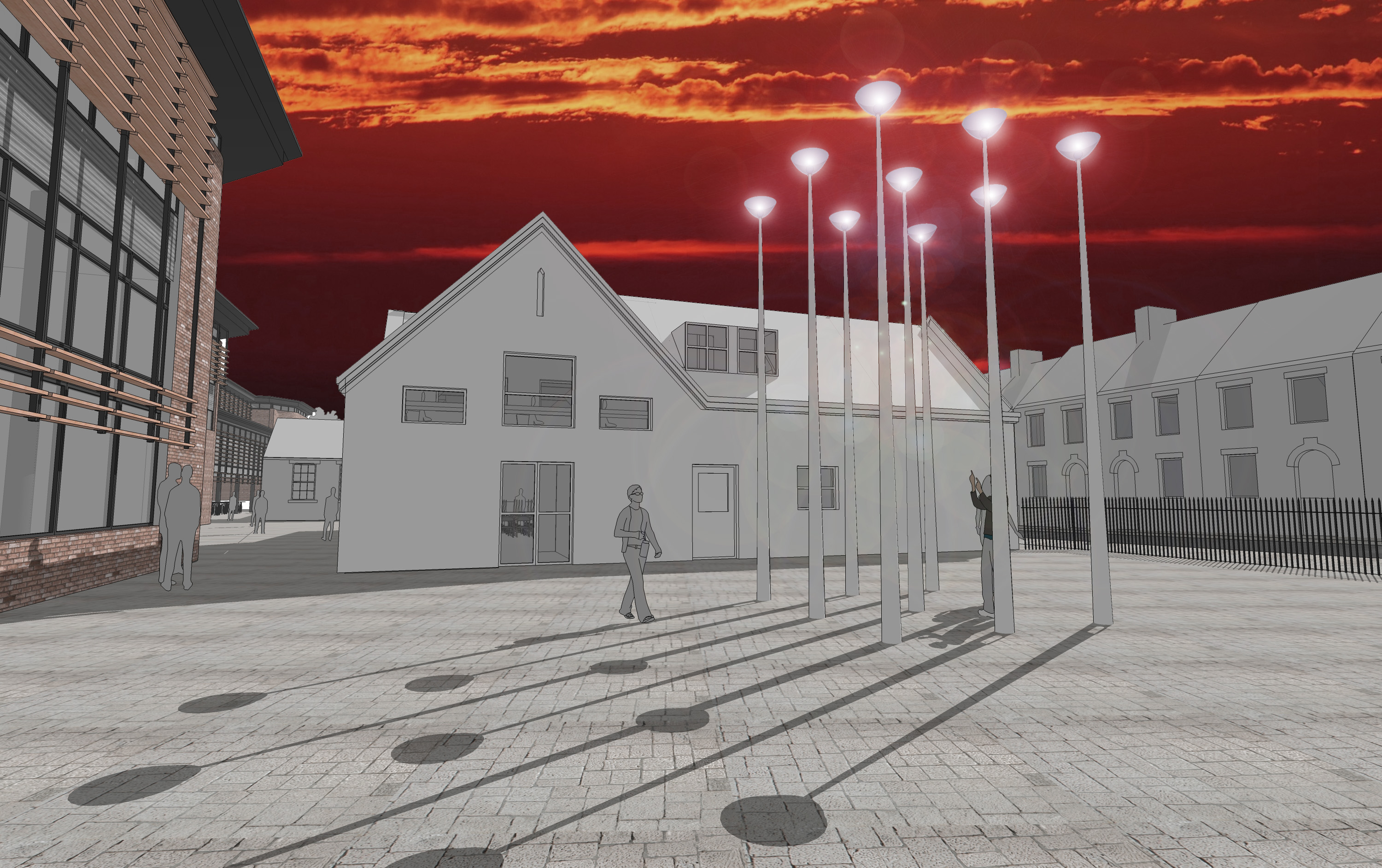 I’m Laughing at Clouds, a permanent commission for a new campus for the Health and Social Care Faculty at Anglia Ruskin University has obtained planning permission and will be launched in 2015.

An ensemble of nine tactile columns, which detect the heartbeat of participants and convert their systolic readings into a composition of light and sound.

I’m Laughing at Clouds modifies public lighting to make it react to the individual. By touching sensors embedded in the lighting columns, the passerby creates a composition of light and sound. The lampposts are programmed to respond to the human touch and record the frequency of the person’s heartbeat. This data is presented through the illumination of the columns and also through samples of children’s voices. Simple sung notes will be recorded from children attending Brunswick Nursery School. As visitors touch the sensors a child’s voice  will sing a note, then at the point the heartbeat is registered the note will be follow the rhythm of the heartbeat. Both the illumination and the sound will get progressively softer until they both drift away completely, only to be reignited by the sensor being touched again.

I’m Laughing at Clouds acknowledges it neighbours, the Medical Faculty, the Music Therapy Course and the Nursery, referring to the essence of human life and health, vocal harmonies and childhood.